A Trip to the Beach 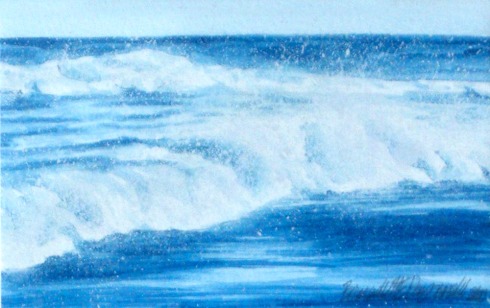 I first saw the ocean at the age of 30 when I visited Assateague Island, Virginia and felt as if I’d come home to an old friend; I also enjoyed meeting the wild ponies after having read all the books in the Misty of Chincoteague series by Marguerite Henry (and closely studying the illustrations by Wesley Dennis) and read about the island and wildlife refuge.

I conspired how to make a living so I could stay there, but instead brought my photos back and have been painting from them ever since. I ahve a few originals left and in this heat of August in Pennsylvania I’m thinking of a trip to the beach where the breeze blows and I can run into the water and swim whenever I want.

“Blue Waves” is the last of a series of small paintings of ocean waves, executed as I experimented with watercolor techniques and materials. I wanted to capture the constant movement and sound of the waves, and in this case I used a spattering of opaque white to render the spray as the waves broke on the beach.

Sunset on the Bay, watercolor © B. E. Kazmarski 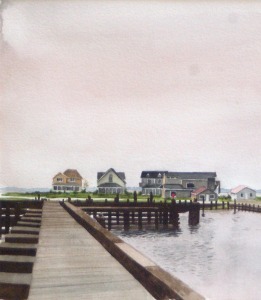 Detail of Sunset on the Bay

Also from that visit is “Sunset on the Bay“, depicting a view from Chincoteague Island across the Chesapeake Bay toward the mainland in Virginia. That stillness, that odd pink light of a sultry evening on the bay…the beach houses along the dock looked so puny and unprotected under that huge sky above and the water below that I took several photos in the days before panoramic images were available.

Later, I brought them out and laid them side by side on my drafting table and sketched the scene onto a full sheet of watercolor paper, not knowing how much of the sky and water I’d use and leaving plenty of extra. I was just experimenting with watercolor techniques and materials and knew I wanted the clarity of the details on the beach houses to contrast with the big sky and water.

Coming a little closer to home is a painting I painted on one of the beaches on Presque Isle in Erie, “Burnished Waves”.

The deepening light of evening and sunset burnishes all it touches with gold and silver, and always encourages a time of memory and reflection for me. I had spent the day on Presque Isle in Erie, playing in the water, collecting shells and rocks, photographing the woods and water, and finally settled on one of the beaches facing west to do some painting. Rain clouds rolled in as the sun dropped toward the horizon, deepening shadows and brightening highlights as I did my best to capture the rapidly changing light, the building clouds and lapping waves which grew as the wind increased.

I matted and framed this painting when I finished it in 1999, but for many years it sat in my “extra paintings” box; there was something I just wasn’t happy with at the time. But when the time came for my annual poetry reading and art show in 2011 and nothing new fit what I was feeling in my poetry, I found this in the extras box and realized that when I painted it, I just wasn’t quite ready for its message. This painting became the signature image for my fifth poetry reading and art exhibit at The Andrew Carnegie Free Library & Music Hall in January 2011 entitled “Burnished Light on Water”, featuring 12 new poems inspired by evening light and reflections, both physical and metaphoric, and an exhibit of paintings and photographs.

I have prints of many others which you can find under “Waterscapes” on my website, though they are from an era when my photographic abilities and equipment weren’t quite where they are now. I’ll be offering prints of those in another post, but for now you can find these three originals and others in my shop on Etsy.