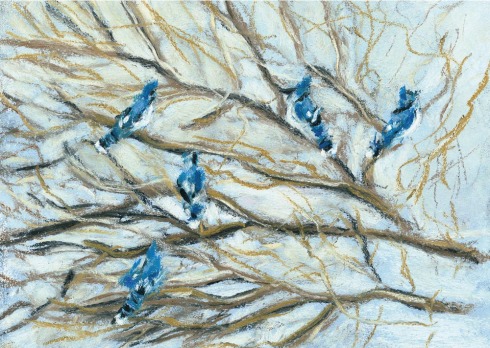 “That would make a great card!”

That’s usually how I decide which of my paintings or photos will end up as a greeting card or note card, following the advice of someone’s suggestion.

I truly love winter paintings because the light is wonderful without the shadows from trees, the reflections from the snow illuminating shadowed areas with soft purples and blues, and the patterns made by bare branches are mesmerizing. This set of four paintings of birds are ones I’d done “from life”, actually standing at a window inside or at my back door rather than en plein air, but I wanted to catch that moment of light and color.

Above is “Jammin’ Jay Blues”, my impression of a bunch of noisy blue jays making a racket in the bare branches of the mulberry. In the winter light, their blue feathers have an extra glow that I don’t notice in summer, and between the color and the sound they occasionally fill my backyard with what feels like a celebratory parade, when all they are celebrating is the sliced apples I’ve stuck on twigs in the tree.

Below is “Snowbird”, the common name for a dark-eyed junco, as it clings to along branch of the forsythia in heavy snowfall, apparently living up to its name. They appear in my backyard each year in October and stay until April, and I love their simple little silhouettes, tiny rounded bodies, short beaks and tails, and that white spot on their bellies that looks as if they’d been dipped in white paint before they left the factory.

This is “Birds in Snow”, inspired by the sparrows and doves that feed on the ground under the feeder outside my front door. To one side of the feeder is a huge spruce, providing cover and safety for many, many birds, and watching them twittering on the branches, then dropping down for seeds one by one and pecking around in the snow in a big crowd, then suddenly all of them flapping back up into the spruce as if signaled by something only to begin the process again is like watching waves on the beach.

And here is “Accent”, a single cardinal in the branches and brambles touched with snow at the end of the yard. This is the “safe spot” for birds and small animals as I’ve let the wild grapevines, rapberries and blackberries and Roses of Sharon grow into a dense tangled mass which is excellent protection from predators. A heavy snowfall with layer each branch with white and the play of light and shadow in the mass of branches creates one of nature’s lovely patterns. Where most of my drawing surfaces have some texture, for this one I added marble dust and grit and gave the surface a rough brushed appearance which turned out to be perfect for capturing the feeling of branches and snow.

Inside, all cards say, “Wishing you warm thoughts and happy memories in this holiday season, and an astonishingly beautiful new year to come.” While I’m offering these for the holidays, they are wonderful all-purpose greeting cards as well and I’ll keep them available through spring in my Etsy shop.

Cardinals Brighten Up a Snowy Day

Of all the birds that visit my backyard, the male American Cardinal is the showiest, and my photos of these have had the most comments—especially, “That would make a great Christmas card!” One of these days I’ll get a few of the girls in the snow—though they aren’t as showy they are still colorful and very dignified, but don’t position themselves in the same way as the guys. So, here we are, a set of cards designed with a little red and green flair that makes it look like a Christmas card as well. Inside they all say, “May your holiday season be merry and bright!”

I think this guy was posing because he sat there for the longest time in the same position. Okay, I get it, I’ll take your picture!

I had wanted a photo that had a significant amount of green along with the red of the cardinal and the snow, and this cardinal obliged.

Just the cardinal’s red color against an overcast sky and very little else.

Five male cardinals were flitting all over the yard during the snowfall. I only managed to catch three in one shot, but it was a favorite.

Since I added the red and green decorations, these are pretty much limited to the holiday season.

You can find all of these in my Etsy shop.

4 responses to “Holiday Cards: Greetings From Our Backyard Birds”